Porsche took some time to think about it, but they’ve agreed to build their special-edition concept car which just made its North American debut last weekend. The Porsche 911 Speedster Concept enters production during the early part of 2019. This will be the automaker’s fifth Speedster variant of their iconic 911. 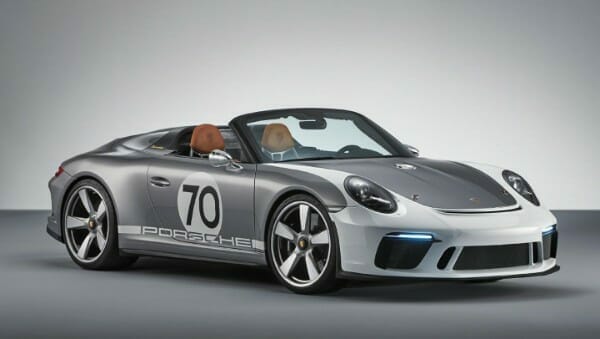 Wait Till You See the Porsche 911 Speedster Concept

This Speedster first made its debut in June as a concept in Stuttgart. Since then, it’s made other appearances at the Rennsport Reunion and the Goodwood Festival of Speed.

The new Porsche 911 Speedster Concept shares similar parts with the GT3 and 911 Carrera 4 Cabriolet. The differences include a carbon trunk lid, carbon hood, small side windows, chopped window frames and a unique body cover located behind the seats.

We don’t know the final specifications yet, but rumor has it that the Speedster will come equipped with a naturally aspirated flat-six engine that produces more than 500 horsepower. It will also be combined with a six-speed manual transmission and is rear-wheel-drive.

This concept is the second to occur between Porsche Exclusive and Porsche Motorsport. Their first occurred in 1992 with the Porsche 911 Turbo S Lightweight.

During the 2018 Paris Motor Show, Porsche agreed to produce the new Speedster model as they showcased the finished concept in Guards red.

This Speedster doesn’t come with a permanent top, just like the models before it. Instead, it has a button-down tonneau cover. There will only be 1,948 produced, just like the first Speedster model. While pricing hasn’t been released yet, we imagine you aren’t getting your hands on one cheaply.

We will provide you with more information on the Porsche 911 Speedster Concept as it becomes available.