Being rich and famous doesn’t make you immune from nasty crashes. Rumor has it that Robert Herjavec’s LaFerrari suffered damage last weekend in Beverly Hills. While the photo from the Beverley Hills police department doesn’t mention Herjavec by name, it does show a picture of the carnage left behind. 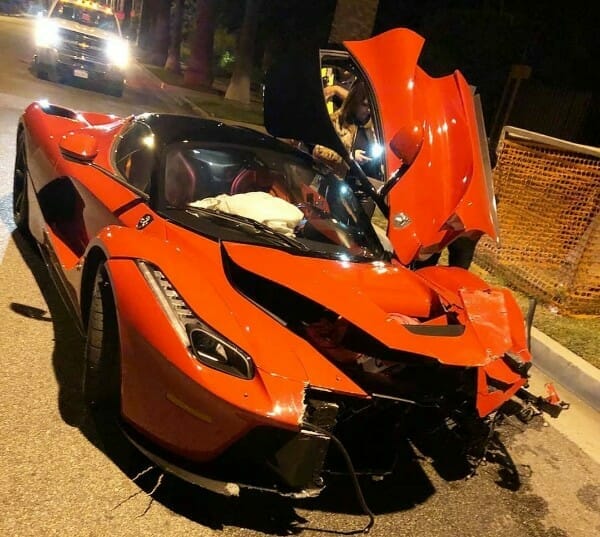 Among Robert Herjavec’s LaFerrari, this Shark Tank judge has several other prized cars in his arsenal. Some of his favorites are the 1958 Porsche 356, 2011 Rolls-Royce Phantom Drophead Coupe and a Ferrari F12 Berlinetta. With such an extensive car collection, we have to wonder if this loss will affect him at all.

While the facts aren’t entirely clear at this point, it appears Herjavec was driving his LaFerrari around Beverly Hills last Saturday morning. Everything was going fine until he lost control of the hypercar.

Witnesses said that the LaFerrari was speeding when it hit a tree located along the side of the road. They also claim that a female passenger was ejected from the car because she wasn’t wearing a seatbelt. That contradicts what the police reported. The Beverly Hills police department confirms that there were no injuries. We would have to believe if someone had been ejected from a LaFerrari while traveling at high speeds, there would have been at least one injury.

Damage to the LaFerrari

As you can see by the photograph, the front of this hypercar received extensive damage. Even the front left wheel came straight off the arch. There’s no hope for the front bumper as well. At this time, it’s unclear whether the car is a complete loss or can be fixed.

It’s important to keep in mind that we don’t have enough information to confirm this was Robert Herjavec’s LaFerrari, but that’s what initial reports indicate. Thankfully, no one was injured in the crash, especially since he is now the father of six-month-old twins.