You are here: Home / Automotive Tips & Guides / The 5 Most Spectacular & Scenic Road Trips In Texas

With 268,581 square miles to explore, Texas is a fantastic destination for a scenic road trip, especially after you purchase one of the best used cars under $15,000. In the Lone Star State, you can visit historic landmarks, admire spectacular landscapes, and have fun in the Great Outdoors. Scenic road trips in Texas abound; here are a few of our favorites. 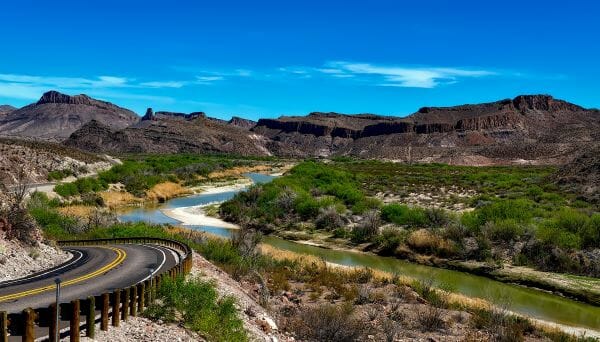 1. From Austin to San Antonio

From Austin to San Antonio, a straight drive along the I-35 is only 80 miles, but you won’t get to see much. Instead, go westward, through the Hill Country, for about 200 miles.

Before you leave Austin, stop at some attractions. On a hill to the east of downtown is the Texas State Capitol Building. This domed, 19th-century structure is an icon of the state and surrounded by spectacular formal gardens.

On the opposite side of downtown and just across the Colorado River, you’ll find the Barton Springs Municipal pool. The four underground springs keep the water in this natural, 3-acre pool a pleasant 680F year-round. Barton Springs is a wonderful spot for sunbathing and swimming.

If you’re still around Austin toward sunset, head over to the Ann W. Richards Congress Avenue Bridge, just south of downtown. As the sun sets, hundreds of bats appear from beneath the bridge and fly out into the night sky.

As you head west out of the city, you’ll enter an area of glittering streams, rolling hills, and tall oak trees. Marvel at the beautiful bluebonnet flowers that spring up everywhere. A popular stop-off 30 miles west of Austin is Hamilton Pool Preserve. The main feature is a stunning blue pool fed by a 50-foot waterfall.

About 70 miles further west is Enchanted Rock, a pink granite hill that provides panoramic views of Hill Country. If you’re driving an older vehicle and planning to park for a while in such remote locations, take jump leads for unexpected emergencies.

106 miles southwest of Hamilton Pool is Bandera, the “Cowboy Capital of the World”. Bandera was once the starting point for the Great Western Cattle Trail. Today, it’s a great place to try out horseback riding. It’s only 52 miles from Bandera to San Antonio.

2. From San Antonio to Houston

Before you leave San Antonio, you must pay your respects at the Alamo. The Alamo mission complex dates to the 18th century when it served as a mission to the local Native American population. However, it’s much better known for its role in the 1836 Battle of the Alamo. Today, you can learn about the history of this important site inside the Long Barrack exhibition.

The direct route to Houston is 197 miles along the I-10 E, but many visitors bypass the city and head straight for the Space Center, 226 miles from San Antonio. The center houses N.A.S.A. Mission Control, spacecraft, interactive displays, and over 400 artifacts relating to space travel, including the world’s largest collection of spacesuits.

Independence Plaza is one of the most popular exhibits. There you can see one of the Shuttle Carrier Aircraft that gave space shuttles a piggyback ride from their landing site to the Kennedy Space Center. You can also climb inside a full-scale replica of a space shuttle.

3. From the Space Center to Dallas

It’s 265 miles from Houston to Dallas along the I-45 N, so prepare yourself for a 4-hour journey. Once there, head for Dealey Plaza in downtown. This is the most famous site in Dallas — the spot where John F. Kennedy was assassinated in 1963.

The Sixth Floor Museum is located on the 6th floor of the old Texas School Book Depository, and it’s where Lee Harvey Oswald stood when he shot the President. The museum is a tribute to the life of J.F.K. and the events of the shooting.

Immediately south of Dealey Plaza is Reunion Tower, which is part of the Hyatt Regency Hotel. This tower topped with a glowing ball is one of the most distinctive structures in the city. A restaurant inside the ball provides a venue where you can eat a meal while admiring 3600 views of Dallas.

4. From Dallas to Fort Worth

It’s only a short 32-miles drive along the I-20 W from Dallas to Fort Worth. The city was founded as an army fort in 1849 and soon became the center of the longhorn cattle trade. Here you can see Texas at its best, with Western design and architecture.

Try to get here before 11:30 am or 4 pm so you can witness one of the twice-daily cattle drives along East Exchange Avenue. You can find an outdoor seat in one of the restaurants near the Stockyards Visitor Center or watch this spectacular from the sidewalk.

Another attraction you won’t want to miss in Fort Worth is the Fort Worth Water Gardens, which is a short drive south of the stockyards. The main feature of the park is the Active Pool. This consists of 38-feet waterfall cascades and steps down into the plunge pool, which you are encouraged to descend if you don’t mind getting wet.

5. From Fort Worth to Amarillo

This is a long, 340-miles drive along the US-287 that will take you around 5 hours, but you haven’t seen Texas until you’ve visited the Texas Panhandle. On longer journeys through relatively rough terrain like this, you should always ensure you have an inflated spare tire and a portable tire inflator for emergencies.

Amarillo, the Yellow Rose of Texas, is the largest city in the Panhandle and also a key post along the historic Route 66. Just a short, 10-miles drive west along Route 66 from the city, you’ll come across the famous Cadillac Ranch. This is an art installation that is a Cadillac graveyard. The Cadillacs are buried nose-down in the Texan soil, and visitors are encouraged to renew the art by adding graffiti to the vehicles. The original artists wanted the installation to be an interactive art experience.

178 miles of Route 66 pass through the Texas Panhandle. Along the route, you can also see the World’s Largest Ketchup Bottle and Wigwam Village. There are many natural and cultural landmarks along Route 66, including Devil’s Rope Museum (barbed wire) and Bugg Ranch (like Cadillac Ranch with VW Beetles) in Conway.

Tell us about your favorite scenic road trips in Texas. With such a big state to explore, there’s a little something for everyone.

Robert Baker is an adventurer who loves to witness the beauty of nature both at home and abroad. He lives in Lincolnshire, England, and can often be found with his nose buried in his book or walking alongside the River Witham admiring ducks and swans. When he is not writing about journeys of adventure, he writes poetry for pleasure.